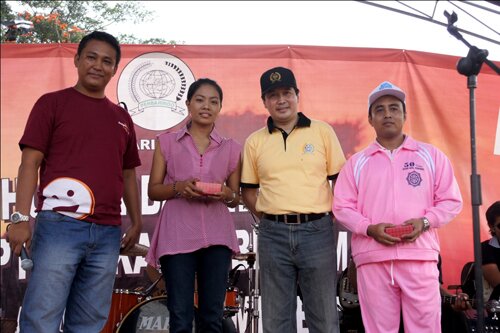 On Sunday August 21, 2011 at Lapangan Alit Saputra, Jl. A. Yani, Tabanan, Bali, Bank Andara participated in Perbarindo Bali Anniversary event. The presence of Bank Andara there is to maintain good relationship that has been developed with Bank Andara’s partners and also to show Bank Andara support for event that is organized by Bank Andara’s partner. As a token of appreciation to BPR who are member of AndaraLink partners, 2 Samsung mobile phones were hand out as a special prize to 2 BPR Staff with the highest AndaraLink transactions served. The winners are I Gede Agus Artha from BPR Penebel and Made Ayu Dwijayanti from BPR Tata Anjungsari. The gifts were presented by Mr. Iwan Kusuma-KPO Bank Andara Denpasar.