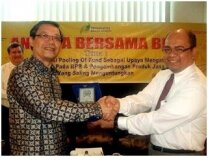 Jakarta – Andara Bersama BPR is fund collection and management services which originated from the members of “Andara Bersama BPR” itself and from Bank Andara. The fund collection and management is intended to maintain liquidity ratio of “Andara Bersama BPR” members during mismatch of fund. Therefore, BPR will have the ability to prevent increasing amount of liquidity shortages.
The product was first launched in Bali on 21st August, 2009 in a formal signing venue with the first members joining as much as 30 BPRs, by this day the numbers has increased to 100 BPRs joining ABB in Bali. After its success in Bali, once again Bank Andara showed its commitment to be the business partner for BPRs by replicating the program in other areas in Java with the support of DPD PERBARINDO from several areas in Java and Bank Indonesia.
Bank Andara has held meetings wih DPD PERBARINDO Yogyakarta (19/3), DPD PERBARINDO DKI (23/3), DPD PERBARINDO East Java (30/3) DPD PERBARINDO Central Java (6/4) and DPD PERBARINDO West Java (8/4). From those meetings, it has been mutually agreed from both parties that ABB will be replicated in several areas in Java and was followed by the signing of Memorandum of Understanding (MOU) between Bank Andara which was represented by Paulus Wiranata as the President Director of Bank Andara with Head of DPD PERBARINDO from respecting areas.

In the near future, Bank Andara with DPD PERBARINDO DKI Jaya and surrounding areaswill hold signing of letter of agreement in front of Bank Indonesia. The realization of ABB is proof of commitment from Bank Andara as a wholesale institution that is not competing as a retail bank in supporting and giving services to the microfinance scene in Indonesia in order for this sector to grow and expand and building capacity to reach more poor people in Indonesia. Together with microfinance institution in Indonesia, Bank Andara is doing effort to alleviate poverty and increasing the welfare of Indonesian people.