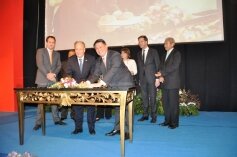 FMO, the Dutch development bank, and Bank Andara have signed a Letter of Intent, today that entails an IDR equivalent to USD10 million senior loan.

The loan will be used to expand BA’s commercial funding of local MFI’s and help the company grow their support by providing efficient systems and technological know-how. The financing will contribute to the creation of jobs and better living conditions of the poor in Indonesia who lack access to finance through the local MFI’s.

Indonesia’s microfinance sector is one of the largest in the world, with a diversity of around 500,000 MFIs serving more than 40 million people. Still, it’s estimated that more than 52% of the people in Indonesia do not have access to banking services and nearly half of the population lives on less than USD2 per day. Most MFI’s are small NGOs, village-owned institutions and commercial or rural banks that serve few microfinance clients. The majority of these MFIs are characterized by low growth in outreach and inefficient systems, which is caused by lack of access to affordable funding and technological know-how.

Through MFI financing the unbanked poor are reached, who still represent almost 50% of the total population of 238 million (in spite of Indonesia being a middle-income country). Via the MFIs that are financed by BA, this segment of the population will gain access to finance.

Commenting on the transaction, FMO’s CEO, Nanno Kleiterp said: “FMO is proud to be working together with Bank Andara to continue their support to local MFI’s and improving the living conditions of poor people. The financing will contribute to expanding much needed access to finance”.

Related to the signing of Letter of Intention, David Yong, President Director of Bank Andara says, “This upcoming transaction, (subject to the Central Bank of Indonesia approval) indicates strong support and trust by FMO to Bank Andara in carrying out our financial inclusion mission through a wholesale banking business model.

This proposed loan will surely increase our credit financing capacity to Microfinance Institutions (MFIs). We will be able to assist more MFIs in meeting the needs of their clients, who are often underserved by formal banking services."

“We also continue to obtain additional funding domestically from institutions, foundations and high net worth individuals as Bank Andara’s business model to serve the low-income communities gains market support. This is in line with our long-term goal to improve community economic development throughout Indonesia,” said David Yong.